Ryan Getzlaf – This Regina, Saskatchewan native is having a career year after a few seasons with below expectations production.  With a spot on Team Canada’s Olympic roster up for grabs, Getzlaf has laid to rest any doubt about whether he will be there to defend the country’s Olympic Gold.  Currently riding an absurd 16-game point streak, including 23 points, with 5 straight Ducks wins to go along with it, Getzlaf has thrown his name into the Hart trophy discussion.

Corey Perry – Riding shotgun for Getzlaf is 2010-11 Hart trophy winner Corey Perry, who also finds himself top 10 in NHL scoring with 36 points, and is 3rd in goals with 21.  Perry just came off a 7 game goal scoring streak that included 8 goals and a Goal of the Year candidate.  Expect Corey to continue being fantastic while giving his bud Ryan a helping hand to contend for league MVP.

Eric Staal – Another former Canadian Olympian, Eric Staal has had to overcome a poor start, not just from himself but his entire Carolina Hurricanes team.  After a stretch with just 1 point in 8 games, as usual, Staal woke up his team’s offense and has 19 points in his last 16 games.  Near his typical point per game pace, Staal is making sure he is not forgotten in the Team Canada discussion.

Kris Letang – When you are the top offensive defenseman on a team with the 1st and 3rd leading scorers in the entire NHL, you tend to expect more than 11 points in 24 games.  After a stepping stone shortened season in which Letang scored over a point per game for the first time, expectations were high going into the season.  Injuries have played a factor, but given his talent and running mates, Letang is a perfect buy low candidate.

Justin Schultz – After coming off a loss to the team that drafted him, the Anaheim Ducks, Justin Schultz is at a low point in his season with just 2 assists over the last 10 games.  As the young guns around him, like Taylor Hall, Ryan Nugent-Hopkins, and David Perron have come alive offensively, Schultz is still trying to round his defensive game.  No longer on the top powerplay unit, this year may not be Schultz’s time to breakout offensively. 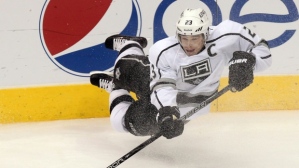 Dustin Brown – The LA Kings captain and life blood, Dustin Brown is one of the grittiest, hardest hitting players in the entire league.  Typically, you can count on 20-30 goals from Brown as well, but he has had a rough year offensively with just 2 goals in his last 11 games.  Given his propensity to pick up hits and shots, Brown may be a great buy low candidate especially in leagues that don’t just count points. 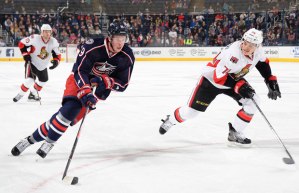 Ryan Johansen – Drafted 4th overall in the deep 2010 NHL Entry Draft, Ryan Johansen is finally putting it all together after a couple bumpy seasons to start his career.  Riding a career high 8 game point streak, Johansen has 13 points in his last 10 games and is finally the top line center the Columbus Blue Jackets have yearned for.  His ownership is sky rocketing, as he is owned in over half of Yahoo league, so if you are lucky enough to be in a league where poolies are snoozing, snatch him up asap.

Kris Versteeg – Traded from the lowly Florida Panthers to the site of his first Stanley Cup win, Kris Versteeg must feel reborn next to Kaner and Captain Serious.  Being part of an offense that can go for 6 goals per game in three straight is a great place for fantasy options.  Routinely playing the top 6, often next to 2nd in league scoring, Patrick Kane, Versteeg has 11 points in 17 games back with Chicago.  Especially in deep leagues, this guy could be a game changer this season based on value.

Roman Josi – While the attention on Nashville’s blueline is either on Shea Weber or rookie Seth Jones, Josi is quietly asserting himself more and more for the Predators.  In fact, over the last month, Josi leads the Preds in ice time with over 26 minutes per game and in points with 9.  With Seth Jones’ ownership more than 4 times that of Josi due to his dynamic potential, Roman is the better value and bet to have a big year.  With a current 4 game point streak, the secret will be out sooner rather than later.