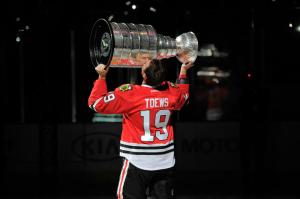 The 2013-14 NHL Regular Season is underway and the cool chill of skates on ice sends goosebumps throughout Hockeyland Canada.  With a frustratingly sparse schedule, our thirst for hockey is only so far, slightly quenched.  Nonetheless, there are plenty of interesting developments in the infancy of this early season.  Here are some story lines relevant to fantasy hockey that we are watching.